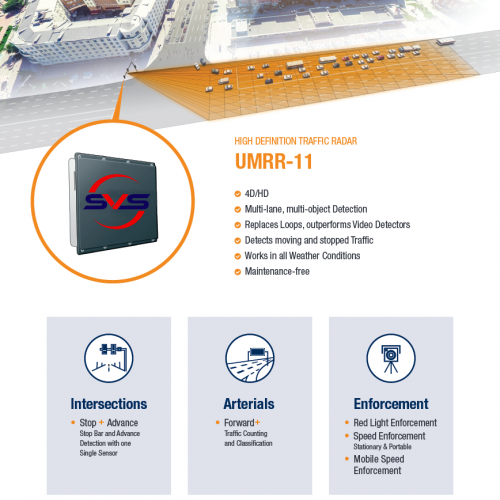 Smart Video and Sensing has been awarded a grant from Innovate UK to collect traffic data using smart radar in UK towns and cities.

We spotted the fact that many local authorities were unable to deliver up-to-date data because their inductive loops etc were damaged to the point where data was unreliable.

SVS is supplying three intelligent Smartmicro radars each of which can be used across up to six lanes of traffic to provide ‘virtual loops’ in the carriageway.  The radar can also determine speed, gap, headway, classification and queue length which will be collected at the roadside and transmitted to a cloud-server for customer access.

The funding allows the so-called NOVUS project to facilitate the collection of volumetric and classification data using ‘virtual loops’ without the need for in-carriageway loop sensors whilst still providing traffic management at the intersection via solutions such as MOVA and SCOOT. NOVUS will provide both the useful loop emulation facility on up to six lanes of traffic whilst simultaneously collecting and reporting data via the cloud server allowing the user, such as a Local Authority, to log-in an view their local traffic data on a dashboard and to download .csv files or JSOM files as required.

SVS hopes to announce its first city partners in the coming days or weeks.