A first of its kind vehicle monitoring system using both CCTV and radar in the same unit has gone live on the M275 in Portsmouth.

The system, brought to the UK by Smart Video and Sensing, features a radar capable of monitoring up to 12 lanes of traffic which has a two megapixel camera built in, meaning the traffic situation is visible to an operator allowing them to quickly verify a triggered event such as a stopped vehicle.

The product, from German company smartmicro, is used to monitor vehicle classification and occupancy, queue and wrong way detection and also pedestrians and cyclists.  Called TRUGRD STREAM, it has been installed on the M275 in Portsmouth as part of a trial to measure traffic statistics and to detect stopped and queuing vehicles. Data from the Portsmouth City Council trial will be shared with Highways England.

“The specification for intersection sensors is self-evident,” explained SVS owner Peter Eccleson. “It is to effectively detect all traffic within the specified detection area, not just on the main carriageway but also approaches, filter lanes, bike lanes or even on pedestrian crossings. For confidence, safety and accuracy each leg of the intersection needs to be covered. Detection rates should achieve 99% with classification of vehicles and pedestrians at 95% or more. Ideally a detector should be relatively low powered and programmable and it should perform well under all-weather and lighting conditions while low-to-zero maintenance is obviously desirable.

“TRUGRD STREAM does all these.  The mixed technology allows this advanced detector to overcome the weaknesses of single technology detectors – this powerful combination provides a new standard in accurate detection. There are more than 88,000 smartmicro radar devices installed world-wide delivering maintenance free, reliable detection data under all-weather and lighting conditions. This technology provides true doppler speed measurement and has a range of up to 300 metres. Up to 12 lanes can be monitored from one device and up to a thousand objects tracked simultaneously. Outputs can be programmed via a traditional relay module to integrate with a traffic signal controller or may be integrated directly into the controller.”

We have developed our NOVUS data analyser unit to be added to any of the smartmicro radar range to collect, analyse, store and forward traffic data to either a cloud-based back-office where planners can review the collected data or via an API and integrated into the customer’s existing traffic database. The addition of NOVUS can be made as an aftermarket product and does not affect the detection capabilities and interface of the radar with the controller, but adds data analysis as a major enhancement – turning the intersection into a data collection site.

“It’s definitely the first time a hybrid system has been used in the UK,” concluded Eccleson.  “It may even be the first time in the world.  We’re very excited to see the results in the next month or two, but have already committed to adding the technology to a tunnel and hopefully it’ll be installed into a major UK town in the near future too.  It’s all about delivering a cost-effective safe solution which, because it works on 4G, can be installed almost anywhere.” 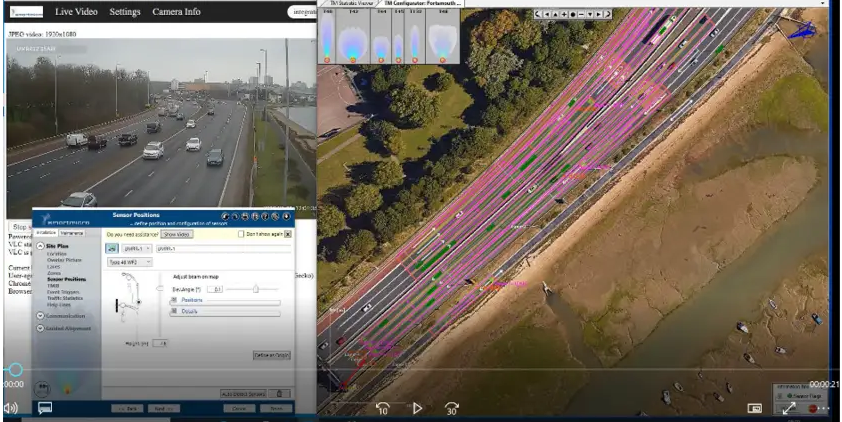